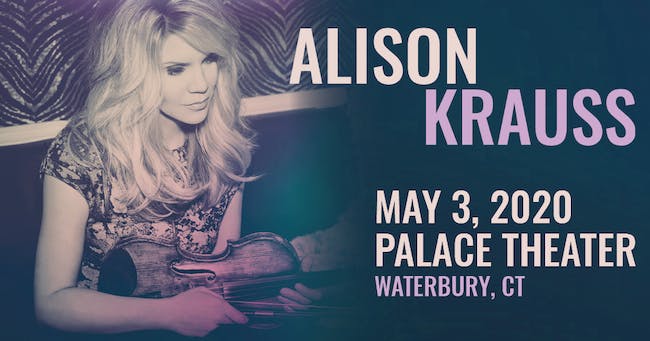 We are still working on postponing this to a new date. The 6/1 date is simply a placeholder to keep this ticket link active. Once we have a new date locked in - you will have the option to either use your ticket for the new date or obtain a refund. Thank you for your patience.

At the recommendation of local and national government authorities, Alison’s Spring Tour will be rescheduled for this Fall. All tickets will be honored for the new dates and we ask that patrons hold on to those until the new dates are announced. We anticipate being able to announce the rescheduled tour dates in May and will continue to show respect for the current stay-at-home orders.

Alison Krauss grew up listening to everything from folk to opera to pop and rock music, but quickly fell in love with bluegrass ­when she began playing fiddle at the age of five. Shortly after, Krauss began entering fiddle contests. At the age of 14, Rounder Records signed her to her first record deal and she went on to release her debut solo album two years later. The accomplished bluegrass musician became a member of the Grand Ole Opry at age 21.

Since 1985, Krauss has released 14 albums including five solo, seven with her longtime band and musical collaborators Union Station, and the Robert Plant collaboration Raising Sand, which was certified platinum and won five Grammys, including Album of the Year and Record of the Year. She’s sold more than 12 million records to date, and her honors include 27 Grammys, nine Country Music Association awards, 14 International Bluegrass Music Association Awards, two Academy of Country Music Awards and two Gospel Music Association awards. Windy City, her latest solo album, debuted at No. 1 on the Billboard Top Country Albums and Top Bluegrass Albums charts and received two Grammy nominations.

Krauss frequently collaborates with artists from numerous genres, including Dolly Parton, Taylor Swift, Kenny Rogers, Emmylou Harris, Gillian Welch, Vince Gill, The Chieftains, James Taylor, The Cox Family, Yo-Yo Ma, Johnny Mathis, Cyndi Lauper, Heart, Bad Company and Phish. She has recorded and toured with Willie Nelson, whom she honored with a performance during the 2015 Gershwin Prize Tribute Concert. She will reunite with Nelson this summer on a co-headlining tour throughout North America. “Whiskey Lullaby,” a duet which she performed with Brad Paisley won two CMA Awards in 2004. She has also produced albums for Alan Jackson, Nickel Creek and The Cox Family. Some of these collaborators were also formative to Krauss and she lists influences including Tony Rice, Ricky Skaggs, Dolly Parton, Larry Sparks, The Cox Family, and Ralph Stanley.

Krauss has contributed songs to numerous films, including “Down to the River to Pray” in the cult classic film O Brother, Where Art Thou? and “You Will Be My Ain True Love” and “The Scarlett Tide” in the film Cold Mountain. She has also provided the voice for several cartoon movie characters, including Bambi’s mother in Bambi II and Annabelle in Annabelle’s Wish, as well as the singing voice of Davey’s girlfriend in the Adam Sandler movie Eight Crazy Nights.