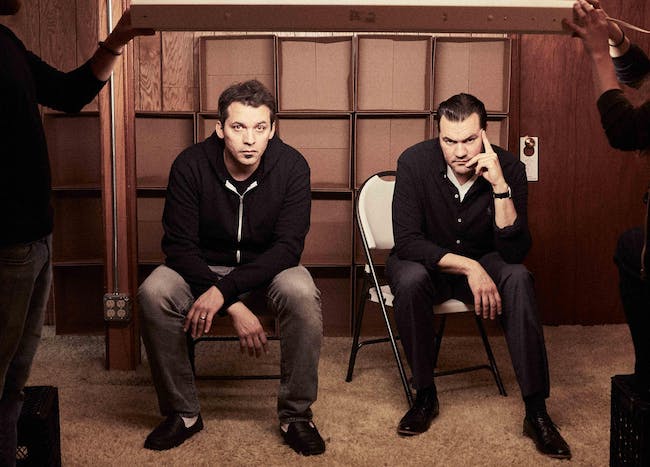 Atmosphere: The Wherever Tour

The world is a vastly different place than it was just a few years ago, and Atmosphere’s seventh album, Mi Vida Local, reflects the ways in which the world, and Atmosphere’s place in it¬, has changed. The idyllic domesticity of their past few records has morphed into anxiety over keeping loved ones safe during turbulent times. Instead of bragging about backstage misadventures it’s about grappling with mortality. The easygoing collaboration between Ant and Slug has started to feel more like the life-or-death intimacy of two men trapped together on a lifeboat.

At times it’s a heavy album (“I might be the last generation of grandparents,” goes a key line from “Virgo”), but it’s far from grim. There are jokes being cracked, joints getting smoked, a little trash talking here and there– after all, it’s still a rap record.

As the name implies, Mi Vida Local is intensely focused on the place it was created– the southside of Minneapolis– where Slug and Ant work tirelessly in their “beautiful basements”, refining their sound without interruption, save for a handful of friends from the Minneapolis hip-hop community who showed up to contribute. A year of one-on-one collaboration resulting in an album that matches complex subject matter with equally deep beats– ones that show a clear lineage back to the psychedelic funk landmarks from an earlier era where America was going through a post-utopian hangover, and prove that there won’t ever be a time where boom-bap beats don’t sound perfectly of the moment.

Mi Vida Local might be the best album Atmosphere’s ever made. It’s definitely the one they needed to make right now, and one listeners need to hear just as urgently. If it’s sometimes an album about how the fight to find happiness never really ends– even after you get the house and the kids and the artistic freedom to make dad-rap records– it’s also about discovering that there’s happiness to be found just in fighting.

It’s hard to place Nikki Jean in time or space.

A born drifter, through decades of musical influences, the half dozen states she’s called home, and the disparate events that have created an enigma of an artist. While those in her cohort dug through crates of music from bygone eras for their sample value, she was reading their sheet music like novels, while writing a novel of her own and it reads like a love song to hip hop.

The early signs were all there. The girl from St. Paul who cried when Irving Berlin died as a child and snuck into De La Soul concerts in junior high would become the artist who worked out of the Roots studio and went on to write songs with Bob Dylan and Burt Bacharach. How fitting that the song she is most known for “Hip Hop Saved My Life”, which she penned with longtime collaborator Lupe Fiasco, off the Grammy nominated classic, “The Cool”, was the song that allowed her to do so?

And who does that? Who comes off Kanye’s historic “Glow In The Dark” Tour only to turn away from the flashing lights opting for a path less traveled. She embarked on a pilgrimage to study with the songwriting masters of Tin Pan Alley, Bleecker St., The Brill Building, Motown, The Philadelphia Sound, Music Row and Laurel Canyon that led to the release of “Pennies In a Jar,” her collaborative first album.

Returning home in more ways than one, Nikki began the work of melding what she’d learned, with who she is. In 2014, her self-released EP, “Champagne Water,” found her collaborating with Ab Soul, Like, and The Social Experiment giving us our first glimpse at the direction her wanderlust would take us. She’s also returned to Rhymesayers, this time not as a kid in search of a mixtape, but as an artist in her own right.

In this most recent release, she’s brought the first fruits of her labor, the sweetness that is synonymous with her voice, and a poignancy that can only be gained through experience to infuse the spirit of hip hop in the jéroboam bottle of her music. Cheers.

Influenced by the music she grew up with,especially female artists. Loves bringing people together by creating a high energy atmosphere with dope remixes and throwback jams!