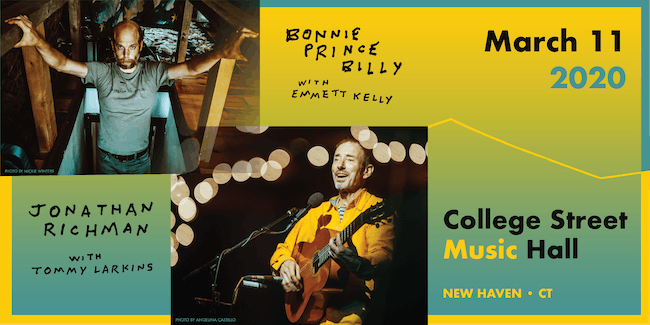 iCal
Google
This event is fully Reserved seated on the floor.

“For the purposes of the current (applicable) timeline, the last time there was a new collection of original Bonnie Prince Billy songs was 2011’s Wolfroy Goes to Town. The released records in the intervening years have been of previously-recorded songs most often written by other people (the Everly Brothers, Susanna Wallumrod, Mekons, Merle Haggard; even Bonnie ‘Prince’ Billy). There was the collaborative record Bonny made with Bitchin Bajas called Epic Jammers and Fortunate Little Ditties. In recent years, the whole world of recorded music, in the way that such music is conceived, perceived, recorded, released and distributed, has been atomized. I tried holding my breath, waiting for the storm to pass, but this storm is here to stay and its devastation is our new landscape. What else is a person to do except what he knows and feels, which for me is making records built out of songs intended for the intimate listening experiences of wonderful strangers who share something spiritually and musically? I started working on these songs thinking that there was no way I was going to finish them and record and release them. This was a constructive frame-of-mind that protected the songs until this frightening moment when we let go of them and give them to you.

“This whole record is intensely inspired by the 50th state. In fact, for a while there the working title of the record was 49Th State of Mind, after the mid-20th century Hawaiian music record label optimistically and ultimately erroneously called “49th State Records.” The songs likewise are influenced by certain Hawaiian musics, mainly the recordings of Johnny Lum Ho and Edith Kanaka’ole; also by the recordings of Jake Xerxes Fussell; by the songwriting of John Prine, Susanna Wallumrod and Tom T. Hall; by the neo-Zydeco cassette compilation Trail Riderz Vol. 1; and by the desire to have some songs that might be learned on the fly at get-togethers at my friend David ‘Fergie’ Ferguson’s house. As these songs were worked on, in the night, my wife would wrap her pregnant body around mine while I sang the songs over and over and over. They’re the first music that our daughter heard.

“The arrangement and production of the record come dominantly from the players themselves and the very circumstances in which the recording of this record was undertaken. Danny Kiely played bass on this, as he had done on Wolfroy and Best Troubador and the Babblers tour as well as Funtown Comedown and many other musical adventures. The mighty mighty Mike Hyman plays drums, Nathan Salsburg plays the lead guitars, Joan Shelley sings along, and Jacob Duncan brought the power with his sax, his flute, his clarinet, my harmonium and the studio’s piano and hammond organ.

“The record is broken into sides, with the first side big and happy and dense and the second side open and questioning and happily sad. It targets the sprawl and bloat of Western Civilization by illuminating the intricate and wondrous of everything that is not celebrated by modern populist mindsets. It’s about the one-step-back rather than the two-steps-forward. It’s about the riches of the unspent past that “isn’t even past.” That, coupled with a perpetual desire to have hooky power tunes that are about themselves and about other musics while still trying to reach into the common space shared by the audience and the singer.

“On a visit to Pearl Harbor (where my mother was born), our guide saw a photo I brought of my mother sitting perched on her father’s shoulders facing away from the camera. She (the guide) started to cry. She told us that the pose, where the subject faces away from the camera, is a traditional pose for Hawaiians and that it signifies the idea that we face away from our future and that our past is before us. So, in that spirit, flip the record over and start from “New Memory Box” again, why don’t you?”

Jonathan Richman has been playing music, recording and touring for most of his life. Jonathan and his drummer Tommy Larkins win fans wherever they play. In the early 1970s, Jonathan formed the noted band The Modern Lovers. Tommy Larkins was in the groups Naked Prey, Giant Sand and other popular bands in Tucson, Arizona.