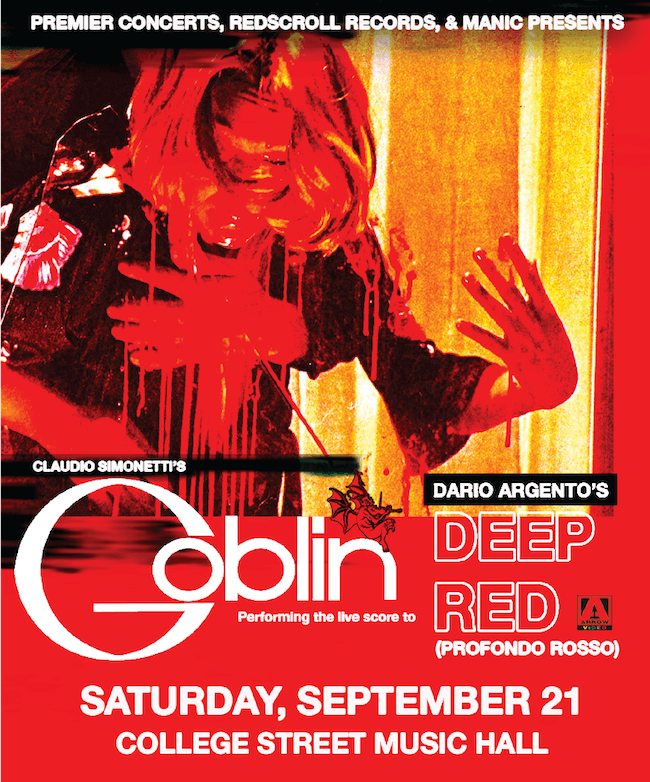 iCal
Google
**Due to reasons beyond our control, this show has been cancelled. Refunds available at point of purchase**

This event is fully Reserved seated on the floor.

Goblin's life has been full of separations, reunions and various line- ups that have characterized the tortuous history of this group over the past almost 40 years.

The band was originally formed by myself and Massimo Morante, born from the ashes of Cherry Five (Oliver), thanks to my father Enrico who brought us to the Cinevox Record label in 1974.

From the first historical line-up of Claudio Simonetti: keyboards, Walter Martino: drums, Fabio Pigntelli: bass and Massimo Morante: guitar, that composed the soundtrack of Profondo Rosso/Deep Red, there have been several changes within the band. Starting with the replacement of Walter Martino with Agostino Marangolo on drums, which lasted until 1978, the date of final separation of the "first Goblin republic", and the participation of keyboardist Maurizio Guarini on the album Roller in 1976.

After the separation in 1978, the band continued to exist with another line-up, led by Fabio Pignatelli, and that's why we used three names (Simonetti-Morante-Pignatelli) for Tenebre instead of the name Goblin, and were accompanied by other musicians from the Cinevox Record label.

In 1984 the band was reduced to two members, me and Fabio Pignatelli, and we recorded some songs for Dario Argento's Phenomena (excluding the main theme Phenomena, which was my own composition). Morante and Marangolo had not done anything with Goblin from 1978 to 2000 when I proposed to Argento that we reunite the band for the soundtrack of his film Non Ho Sonno/Sleepless, but sadly the brief reunion ended just after we finished recording the soundtrack.

Many other bands were formed in the following years inspired by the original Goblin: Daemonia, BacktotheGoblin, Goblin Rebirth and New Goblin, all with original members of the band in one combination or another.

Now, I formed my own version of the band named Claudio Simonetti 's Goblin.

We don’t want to ignore any band that is currently active with a similar name, we simply want to continue spreading the great legacy of Goblin’s music in our own way, music that has inspired so many bands and so many generations of musicians over the years.