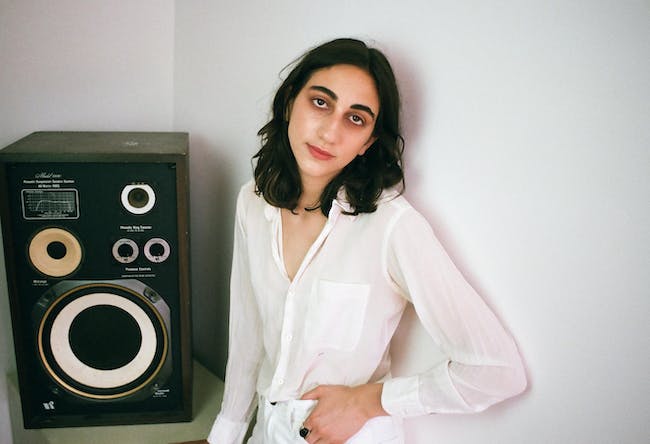 Holding fast to the emotional honesty of Playing House (2017), Common Holly’s sophomore record, When I say to you Black Lightning is a look outward; an exploration of the ways in which we all experience pain, fear and self-delusion, and how we can learn to confront those feelings with boldness. A swift change of course, WISTYBL couples a submergence into the dark and dissonant with its consolation in harmony, and a dose of dry humor.

The record is more experimental than Brigitte Naggar’s debut. It is rougher, looser, louder and more atonal. It feels edgy, but still kind. WISTYBL ditches fear without losing vulnerability, and trades in sadness for the healing powers of anger, and the strength of observing, recognizing and confronting. Through its 9 labyrinthian yet catchy tracks, shaped sonically by the seriously unique visions of Devon Bate, Hamish Mitchell, and Naggar herself, the album observes the complexities of mental health, the precarity of life, and the challenges of finding strength in the face of grave misunderstanding.

On its own, When I say to you Black Lightning is a phrase which holds authority—it does not apologize for itself, it stands boldly where it is, and yet it also laughs at itself for daring to take up that space. The title phrase is directive—it suggests a thought without completing it, engaging you to contemplate what comes next and pointing the finger away from itself to somewhere undefined. If Playing House was about personal turmoil, WISTYBL is about humanity’s emotional challenges and how we each approach them as individuals. The former centered around one person and one heartbreak, while the latter circles different characters that Naggar has observed or interacted with—romantically or otherwise, whose stories cumulate in a whimsically entertaining tale of struggle, and the resulting emotional growth.

“This record isn’t one singular statement; it documents a period of growth. The songs were written mainly over two years and they all reflect potent moments from that time. While it’s obviously personal and based off of my own experience, I want this album to feel familiar—life gets complicated as we grow, people form relationships to each other, they lose things, they discover pain, fear, self-delusion; sometimes it’s funny, sometimes it’s weird, often it sucks—and we have to navigate our way through all of that.”

This narration of experience is first introduced on the orchestral opener “Central Booking,” (slang for jail), where Naggar illustrates the story of someone whose troubled past forces them to pick up and start over in Canada. Whispering the hook, I’m sorry New York broke you, she coyly pairs empathy with aloofness—suggesting perhaps that for once, someone else’s concerns might not need to be hers as well—while also playing on the stereotype that Canadians can’t help themselves for apologizing wherever they go.

This playfulness is also demonstrated in “Joshua Snakes,” using sounds composed of quirky materials like bouncy balls, fidget spinners, and accidental recordings of roommates—an area where electroacoustic producer Devon Bate (Jean-Michel Blais, Jeremy Dutcher) thrives. Joshua Snakes works through the themes of restlessness, jealousy, even mild obsession, and paints a picture of the damsel in distress tied to the tracks, but this time without the need to be rescued.

“Measured” feels more sober, a tone not unfamiliar to the album. It’s what Naggar calls her “thesis statement on love + pain,” where she documents a new cynicism, the disillusionment in discovering that romance belongs to a strict formula of loving = losing = hurting = healing = loving again, in perpetuity. The track is sparse and confrontational, and despite its progression always returns to the same verse form, the same quiet moments, and the same last line: I think we’ve been measured out for pain since birth.

In a self-deprecating and painfully catchy final statement, Naggar sings Don’t leave me, I’m crazy, ok. “Crazy Ok” is voiced in the first person, but Naggar explains that the line wasn’t actually her own when she first took her inspiration from it, bringing home the idea that most of the record could be as much about her as about anyone else.

WISTBYL feels like Naggar’s conversation with herself, meticulously penned to work through challenges as they unfold. It’s cool, and more than that, it feels important. It’s about finding the seeds of strength to navigate adult life, and about the ways in which we all find ourselves in that place of struggle when life starts to show you its cards and you begin to understand, in the artist’s words, “just how real shit can get.”

New Haven's Sam Carlson writes with an acerbic punch. With incisive and often satirical lyrics he explores a fascination with the mundane, good and bad uses of time, and a fistful of bummers. He has worked in different capacities with a variety of bands including but not limited to: Ports of Spain, Laundry Day, The Proud Flesh, 10K Blades, Rob Carlson and Benefit Street, and Winter White.

Singer songwriter Daphne Lee Martin has juggled multiple roles through her career, balancing a road warrior’s commitment to the road with a sound that blends the traditions of southern roots music with the sharp sensibilities of New England folk, indie rock, sophisticated soul, and all points in between.

On Scared Fearless, her fifth album of original material, she shines a light on her years logged as a touring musician. A lifelong musician whose previous albums have doubled down on her fictional storytelling chops, Martin turns the camera lens upon herself with Scared Fearless. This is the soundtrack to a life spent in the trenches, pulled into battle by one’s dedication to art, travel, and exploration. It’s an album shaped by mile markers, rear view mirrors, and wanderlust. And, like the highway that runs beneath Martin’s wheels, it points her toward a new horizon.