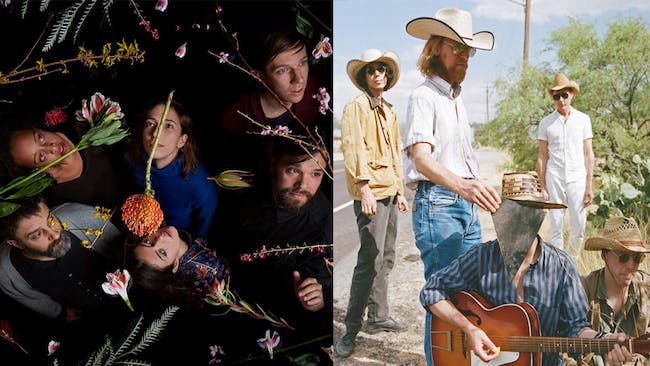 From Atlanta, Georgia, the origins of Deerhunter can be traced back to when frontman Bradford Cox first met guitarist Lockett Pundt at high school. Years later Bradford met Moses Archuleta and started jamming together. Other contributors to Deerhunter since its establishment in 2001 include Josh Fauver, Colin Mee and Whitney Petty. The current incarnation consists of Cox, Pundt and Archuleta plus bassist Josh Mckay and guitarist Frankie Broyles.

Deerhunter’s first album was a lo-fi experiment not initially intended for the wider world, but appeared in 2005 on a local Atlanta label, Stickfigure. Although officially untitled, it has since become known as Turn It Up, Faggot; a phrase that doesn’t actually appear on the sleeve but is an insult that Cox claimed was often thrown at the band during their early gigs. Their next album, Cryptograms (2006), was generally considered to be their real debut and as such things started to get serious for the band. They had moved to fêted Chicago indie, Kranky (Godspeed You! Black Emperor, Low, Stars Of The Lid), and the world outside was starting to pay attention.

Then in mid-2008, Deerhunter and Kranky signed a deal with 4AD, allowing them to finally release music outside the US and the band’s next move was to prove epic in more than just musical terms.?? Recorded over the course of a week at the Rare Book Studios in Brooklyn, NY, the Can and Wire-inspired Microcastle (2008) was to propel them to further heights. However, the album leaked four months before release, leading the band back to the studio to record Weird Era Cont., an album in its own right added as a bonus disc to make Microcastle a 25-track colossus. Not content with such prolificacy, the band announced a new five track EP, Rainwater Cassette Exchange, in 2009 and that its release would coincide with the band’s extensive European, Japanese and Australian tour in May and June.??

Displaying few signs of slowing down, Halcyon Digest, the band’s fourth studio album was released in September 2010. Remaining in their native Georgia to piece together the album, Halcyon Digest took just a few weeks to complete. The recording sessions took place at Chase Park Transduction in Athens with Ben H. Allen helping to co-produce the album, while final track, ‘He Would Have Laughed’, was recorded separately by Bradford Cox at NOTOWN SOUND in Marietta. To announce the release, the band fully embraced the DIY mindset of their New Wave heroes from the 70’s and 80’s with a Cox-designed, cut-and-paste Xeroxed flyer. It’s with these kind of approaches that Deerhunter continue to widen their sphere of influence and impress with each subsequent release.

After a brief hiatus, during which time Bradford Cox and Lockett Pundt released their own albums as Atlas Sound and Lotus Plaza respectively, a new Deerhunter line-up (with additions of bassist Josh Mckay and guitarist Frankie Broyles) reconvened in January 2013 at Rare Book Studio in Brooklyn, New York. Produced by Nicholas Vernhes and Bradford Cox and recorded in the dead of night, Deerhunter’s new longplayer Monomania will be released in May. Monomania finds the group recalling its scrappy punk aesthetic; a perfect nocturnal garage rock album full of the layered and hazy vintage guitar sounds that define them.

THE NEW SELF-TITLED ALBUM does everything we want and expect from Dirty Projectors -- but in a way that we never could have imagined or anticipated. In a career of surprising conceptual gambits, unexpected stylistic shifts, and continually changing lineups -- this is, as DJ Khaled says, "ANOTHER ONE"!

A PROTEAN, SHAPE-SHIFTING CHAMELEON, Dave Longstreth, the founding member and sole constant Projector, goes where the music is: he builds his band and arrangements around the songs he's writing in that moment.

'Dirty Projectors' is a BREAKUP ALBUM. These songs, coming out of a place of heartbreak & depression, began as private gestures of catharsis & healing. DL couldn't see any future for Dirty Projectors, much less imagine these as Dirty Projectors songs, until he went to LA, where Rick Rubin urged him that this is exactly what they are.

The ABSENCE OF FEMALE VOICES -- notably that of the beloved Amber Coffman -- becomes both the subject of the album and the engine of its most inspired leaps: allowing DL to branch out as a producer & arranger, encouraging him to hone his songcraft, and forcing him to focus on his own voice, to revelatory result.

Perhaps the greatest surprise is that Longstreth's VOICE -- one of the most iconic & divisive in music today -- has gone from being a sometime-liability to his music's greatest and most expressive asset. The CHOPPING, LAYERING, SPEEDING UP & SLOWING DOWN of the voice is processing both literal and metaphoric: DL works through the new absence on a course of self-examination, interrogation, reflection. But his natural voice is the great reveal: out of the black hole of loss comes a quantum spark of CONFIDENCE & PURE FEELING.

From the baritone lament of Keep Your Name to the crooning pathos of Little Bubble and the breathless falsetto leaps of Winner Take Nothing, these songs establish DL as one of music's most VERSATILE, ORIGINAL SINGERs.

The album flexes DL's tremendous GROWTH & STRENGTH AS A PRODUCER. Classic Projectors trademarks are here -- guitar, hocketing, powerful three-part vocal harmony -- as a foundation for a new world of insanely fresh drum patterns, Rhodes, Wurlitzer, brass choir, string quartet, piano, modular synth, Kontakt and Arturia patches, all tied together in dizzying next-level arrangements. DL is at the top of his game as one of 2017's most original producers in any genre.

DL himself remains agnostic about genre and ecumenical in his inspiration. In some ways, the album answers the question Dirty Projectors posed way back in 2009 -- before the waves of nu-r&b and Beyoncé quoting the Yeah Yeah Yeahs -- with STILLNESS IS THE MOVE: what would a post-genre collision of r&b, indie rock and other music sound like? From the SUBTWEET BOP of Keep Your Name to the DIGITAL BENEDICTION that is I See You, this is truly GENRELESS MUSIC that pushes at and expands the edges of what we're used to hearing.

DL cites Karl Ove Knausgård, Joni Mitchell, and Drake as his most passionately explored writers of the last few years, and there's a new DEPTH & LYRICISM in this suite of richly complex songs. Self-reflection and fantasy helix together in DETAILED LAYERS OF STORY: rife in ambiguity, raging with doubt and ambivalence, labyrinthine in their self-contradiction. Considering this range, the NARRATIVE UNITY of the album is astounding. Dirty Projectors is known for concept albums -- from the collaboration with Björk, 'Mount Wittenberg Orca' (2010), to the glitch opera 'The Getty Address' (2005), to the Black-Flag-reimagined opus 'Rise Above' (2007). And now 'Dirty Projectors' is the most TAUT, UNIFIED, CONTINUOUS ARC of storytelling yet -- beginning with the anger and self-recrimination of "Keep Your Name" and ending with the forgiveness and reconciliation of "I See You."

DL has made a breakup album before: his first album, the rare and out-of-print 'Graceful Fallen Mango,' from 2001. Fifteen years later, Dirty Projectors is arriving where you began and knowing the place for the first time. The significance of it being a self-titled record is clear: 'Dirty Projectors' is both A HOMECOMING AND A REDISCOVERY. Time is a spiral, and this is an astounding, vivid, immersive piece of music -- YOU JUST GOTTA HEAR IT!