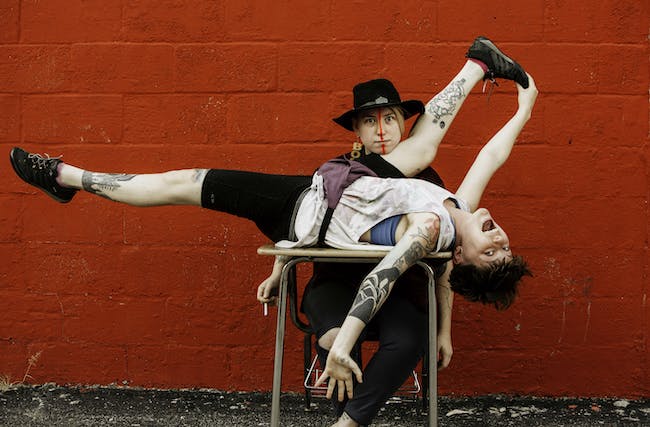 Kentucky-fried queerdos GRLwood are back with their sophomore album I Sold My Soul To The Devil When I Was 12,out now on sonaBLAST! Records. Addressing the well established themes of punk rock such as politics and depression, along with new, much welcomed topics of queerness and sexuality, each song can be viewed as an internal monologue of a 12 year old, a pivotal age that throws a kid into the struggles and confusion of adolescence.

Still fresh faces, Rej Forester (guitar and vocals) and Karen Ledford (drums) are not fresh to the stage. Known for their energetic live performances, since joining forces the two have had a full schedule of shows, travel, and recording. Refusing to be confined by labels, these queerdos are a musical force paving their own path through the music scene.

Similar Kind is an indie alt/pop band from the tri-state area formed in 2017 The band members consist of Julia Breen, Ben McNamara, Evan Murphy, Finn Mangan and Miles Dominici. The band started as just a few friends jamming in a garage and has blossomed into playing shows all over the tri-state area and writing original tunes.

Similar Kind is debut EP “Faces & Places” is available on all streaming services!

With an uncanny sense of gratefulness, Evelyn Gray weaves together the emotional history of their first year transitioning. Their debut album, "Let the Flower Grow," explores vulnerability, visibility, authenticity, and self-acceptance. Their work on the self through music has dispelled the feeling of being misplaced, of wondering why they were alive and what they were doing here - "here" being not just on this planet, but in this body. Their music provides a calmness and encourages space to be held for those needing to feel seen, heard, accepted, understood. Attesting to their live sound, the New Haven Independent writes:

"Each song began tenderly, inviting you to come in and be comforted, reassuring you that you were safe and understood, and then allowing you to release whatever ailed you as Gray brought each song to its climax, guitar swung back, hands raised with voice and spirit elevated. The crowd was held captive."

Gray's work is not just for their sake, but for their community at large (or, as they put it, for "anyone who has ever been made to feel like there was something wrong with them"). For all those who are still afraid to be themselves, for anyone who feels like they don't have a voice, for anyone searching for representation, Gray is hear to speak up.