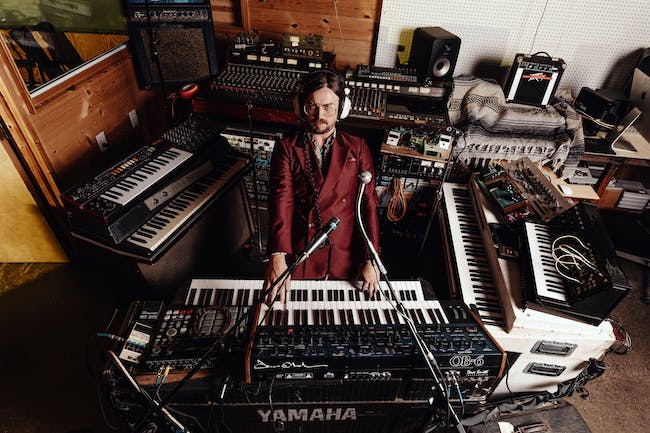 For nearly two decades he’s been the “J Roddy Walston” of the “and the Business”. Now he’s just him, and a whole rack of songs…. and a moving truck full of synths, pianos, tape machines and sequencers. After quitting the music industry in december of 2019 he’s back and some would say backer than ever. Ready to play all your favorite songs in completely unfamiliar ways, and all his new songs in the only way he knows how, J Roddy Walston is out to meet himself again, and do it in front of other people. Join him as he shares a single dose of strangeness.

Parker Gispert was still in college when he helped form the Whigs in the early 2000s. But after five critically-acclaimed albums, hundreds of tour dates all over the world with the likes of Kings of Leon, Drive-By Truckers, the Black Keys and many others, and television appearances everywhere from the Late Show with David Letterman to Jimmy Kimmel Live! , the Athens, Georgia-bred rockers decided to pull back on activity in 2017.

Which left Gispert, who had spent the majority of his adult life either in the studio or on the road with the band, at a crossroads.

“It occurred to me that if I wanted to record and tour that I was going to need to do it solo,” the singer, songwriter and guitarist says. “I'd always thought about it in the back of my mind as something that I wanted to do one day, but ‘one day’ had never really come.”

Now, ‘one day’ is here in the form of Sunlight Tonight , Gispert’s debut solo album (produced and mixed by Emery Dobyns). The eight-song effort finds Gispert, known for leading the Whigs through raw and jangly southern-garage rave-ups, taking a decidedly different musical approach—biting electric guitar riffs are cast out in favor of gentle acoustic picking and strumming, and his band mates’ raucous rhythms are traded in for minimal accompaniment that includes light bass and drums, orchestral strings and even trumpet. Gispert’s lyrics, meanwhile, are his most introspective and personal to date (albeit with a bit of humor thrown in here and there) and they’re delivered in a vocal style that finds him pushing out on his range. “I didn't need to project over a band, so I was able to sing in registers I hadn’t really used before, like a lot of high falsetto,” he explains.

The end result showcases a different side of the artist, to be sure. But it’s one that Gispert felt compelled to explore. “A lot of guys from rock bands that go solo, they just hire another bassist and drummer and go make another album,” he says. “I didn’t want to go that route.”

Ultimately, his change in musical direction was helped along by a change in geography. A longtime resident of Nashville (by way of Atlanta, and then Athens), Gispert last year accepted an invitation from a friend to visit his 100-acre hemp farm, located roughly an hour outside Music City. “It was like out of a total time warp,” Gispert recalls of the property. “No heat or AC. No animals. No active crops. Water from a well. It was just, like, a house and a plot of land. I ended up staying there for a year.”

That plot of land was where Sunlight Tonight came into being. “I would wake up early and get my guitar and walk outside and come up with all these songs,” Gispert says. “And without a band to turn to as the deciding factor on, say, a melody or a lyric, I ended up turning to the scenery and the landscape I was dealing with instead. The farm was like my collaborator—it kind of answered everything for me, as weird as that sounds. And the songs started coming pretty quickly.”

The first one that came is also the one that opens Sunlight Tonight —a psychedelia-laced meditation titled “Through the Canvas.” Built on a bed of acoustic guitar and cello, the song finds Gispert laying out what is essentially a statement of purpose: “Suddenly I got up / Suddenly I could move / shook off all the bullshit that was weighing down my shoes.”

Explains Gispert, “With the Whigs, I had been in that band since I was a teenager. So when that slowed, I found myself in a place where I was almost paralyzed, like, What do I do next ? It was just confusing. But that song sums up what happened when I got to the farm. It was like, suddenly I got up, grabbed a guitar, walked down to this big field and...”

Shook off all the bullshit?

Gispert laughs. “Yeah. And bullshit was exactly the word to describe it. It was all the worries. All the fear. All the drama. All the stuff you can’t even articulate. After I put all of that behind me I was able to set out on this journey of making a solo record.”

That journey ended up being very unlike any Gispert had embarked upon previously. For starters, he says, “I wrote all of the songs for the record while outside, and that’s something I’d never done before. Usually I’d be in a cramped apartment or a studio space—not, like, walking around outside in a big open field at 1:00 AM, just singing and playing.”

He laughs. “And the good thing is, I was on this secluded property, so nobody could see me—it didn't matter if I looked like a total goofball just wandering around in my jean shorts strumming an acoustic guitar.”

The material that Gispert came up at the farm with was primarily acoustic-based, but at the same time still incredibly diverse, from the dark folk of “Magnolia Sunrise” to the ambient tones of “Life in the Goldilocks Zone”; the T. Rex-y groove-glam of “Volcano,” to the lo-fi garage-fuzz of “Is It Nine”; the exuberant mariachi-horn-rock of “Too Dumb to Love Anyone” (the one composition Gispert says was originally written with the Whigs in mind) to the oddball genre exercise “Do Some Country.”

That last one also features some witty wordplay (“I am a rock artist,” Gispert sings, before adding, “I paint pictures on limestone”), as well as a unique origin story regarding its title. “I was at a Nikki Lane show,” Gispert recalls, “and in between songs this woman in the audience kept yelling (in a heavy southern accent ) “C’monNikki! Do some country !”And my friend and I were just like, ‘Man...that would be such a sweet song title!’ ”

There are other lighthearted moments on Sunlight Tonight, such as the nursery-rhyme-like “Is It Nine,” on which Gispert attempts to determine which number would fit best into the alphabet. The genesis of that riddle? “It was just a ridiculous question I asked myself, and I had never heard a song about that particular question before,” he explains. “So I thought for my first solo album it would be a good idea to have one track that was uniquely ‘Parker.’ Because there are so many love songs or political songs or whatever out there already.”

Which is not to say that Gispert shies away from those topics on Sunlight Tonight . “Too Dumb to Love Anyone,” for one, addresses his present station in life as an unwedded man. “I'm 36, and most of my friends are at that point where they’re getting married and having kids,” he says. “And my friends' wives will say things to me like, ‘Parker, when are you gonna meet somebody and join the club?’ So I always say, the only thing standing in between me and a great relationship is that the idea has never occurred to me.”

Then there’s “Magnolia Sunrise,” which unfolds somewhat uneventfully, with Gispert grabbing breakfast at a local diner (“Coffee, Tennessee / grits made to order”) before an anxious waitress shatters his mundane tranquility: “There’s still a lot that could go wrong,” she tells him. As the guitar accompaniment builds and the orchestral strings turn frantic, Gispert intones, ominously, “One Saturday morning / there will be no warning.”

The narrative, Gispert says, “is based on a real interaction I had, at a diner right down the road that I’d go to all the time in the mornings. I ended up talking to this waitress who was having irrational fears of, like, a hurricane coming, or a nuclear threat. It brings up this idea of, you could be chilling out, enjoying your day, and when you least expect it, that's when something happens—tragedy could be right around the corner.”

Clearly, Gispert’s environment and experiences at the farm factored heavily into the words and music he wrote for Sunlight Tonight. But when it came time to record the material, he left his rural surroundings behind and headed back into Nashville, cutting tracks at Blackbird Studios and Hacienda Studios, with producer Emery Dobyns (Patti Smith, Antony and the Johnsons) at the helm. Dobyns also added various instrumentation to the tracks, alongside contributions from Black Keys drummer Patrick Carney, former Sparklehorse vocalist Sol Seppy and Adele bassist Samuel Dixon, among other musicians. “It was like there was one phase of the record, which was me alone writing everything,” Gispert says. “And then there was the second phase, the studio phase, which was very much a team effort, with Emery shaping the record sonically and production-wise.”

When it comes to playing this material live, however, Gispert has been going it alone—an atypical arrangement for him onstage, but one that he’s been finding incredibly satisfying. “I love it a lot,” he says about being out on his own. “I feel really comfortable up there by myself, and in some respects I'm able to connect with the crowd in a way that I never was able to do with a band.”

That said, Gispert still gets plenty of opportunities to play with his band, as the Whigs continue to reconvene for sporadic live shows, including a recent spate of dates celebrating the tenth anniversary of their 2008 record, Mission Control . But far from his solo endeavors having a negative impact on the group, he’s found the opposite to be true. “I'd always been afraid of doing something solo because I thought it might mess up the band vibe, but now I'm able to see that it actually helps,” Gispert says. “When we do get back together to play, it's fun and it's fresh and it has new life.”

As for what the future holds, Gispert is open to any and all possibilities that might follow in the wake of Sunlight Tonight . “Because I didn't even see any of this happening, you know?” he says. “So I can’t really say what comes next. But it’s almost like a weight off my shoulders to not really know where I'm going from here.”

One thing he can say for sure: the farm that served as both inspiration and companion to Gispert throughout the writing process for Sunlight Tonight is now a thing of the past.

a cosmic peach striking the flower of time. a soft dream. a fast shoe. somewhere to be. nobody to go.  cosmically put together by the organic juices of the universe.    we have the coco and we use him (Charlie Glenn, guitar). we have deux peaux and he has the funky foot (Raphael Katchinoff, drums). we have the biggest boy and he is still growing (Andrew Carper, bass). we have the casual pink and he will bring his pontoon of followers (J Roddy Walston, keys &vox).   we are the undisputed big tongues of juke juke. we are coming for your dreams babies and gentlethems! we are tonight only!   palm palm