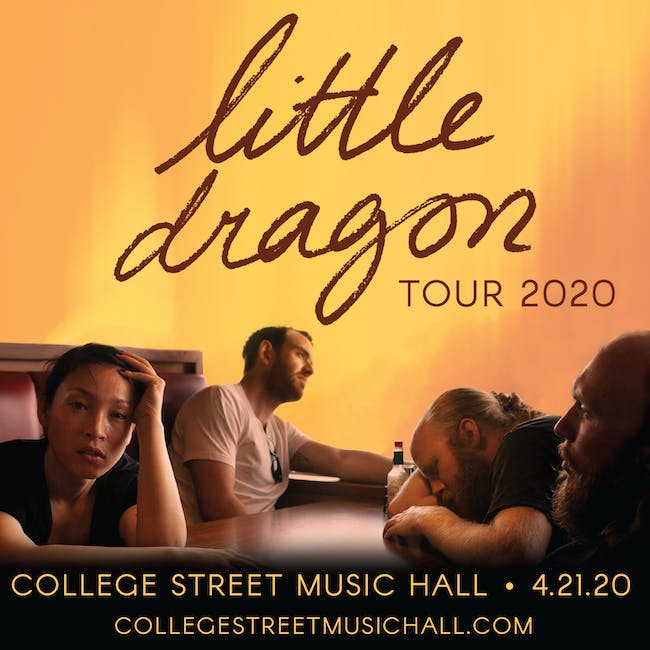 Grammy-nominated Little Dragon have announced their long-awaited new album Season High, out now digitally on Loma Vista Records (CD + LP in stores May 5th). This is the first new music from the electro-pop band since they released their acclaimed 2014 album, Nabuma Rubberband. Season High was produced by Little Dragon, with co-production and mixing by James Ford, in their hometown of Gothenburg, Sweden.

Discussing the process behind recording Season High, Yukimi muses, “We have grown through the years but the making of this album has been a struggle. As much as our band is based on a deep friendship we are four strong wills who find it really frustrating to compromise. We have gotten better at that though, but it’s still a real battle. It gets harder and harder for us to make records but we still love it. Sometimes it feels like we have 100% passion and life or death emotions yet there’s a pointlessness with everything. We want to exist in our own bubble where we can stay curious about sounds. The magic feeling that sounds can sprinkle over any boring day is what got us all hooked. That feeling of escapism …maybe because Gothenburg is a grey place for most of the year, our curse and blessing is that we never quite succeed.”

DC-based duo April + VISTA are the odd ones out, toting a sound that whisks listeners into a world of their own. April George (violinist, pianist, vocalist, composer) and mattVISTA (producer, bassist, composer) pull from a wildly eclectic range of influences, fusing lush soundscapes and string arrangements with rich textures and mesmeric storytelling. Their latest EP, You Are Here, was released in 2018 and yielded two juxtaposing singles–the powerful anthem “Own2” and the intimate “How to Get By”. The duo’s dynamic live act has taken them around the world as they’ve toured with heavy-hitters like Little Simz, Little Dragon, and GoldLink. In October 2019, they delivered their newest single, Every Void, which trades their usual meditative sounds for jagged ends and dark subject matter.

sir Was is the musical journey of Joel Wästberg, documenting a wealth of unique & idiosyncratic influences. Growing up in the tiny village of Frillesås on the western coast of Sweden, he had an early career as a jazz saxophonist that led to studying in Gothenburg (where he lives now) and an influential time at the University of Kwasulu-Natal in Durban, South Africa. From there he started focusing more on drums, and immersed himself in discovering pan-African rhythms & sounds, traveling through Mozambique and Zimbabwe, finding musical inspiration all along the way. The resulting range of styles is as uncommon and refreshing as the story might suggest. It is intricate without feeling complex, with driving beats and dynamically varied instrumentation weaving throughout.

sir Was’ first offering is a relatively gentle introduction. ‘A Minor Life’ sets the scene with colorful flourishes of bagpipes & recorder sailing around a core of syncopated modular synths. Nestled underneath is a swinging live beat so clear and sharp, it could be mistaken for a J Dilla sample.

Simply put, whilst some artists strive to push boundaries, sir Was seems blissfully unaware of them in the first place.


Little Dragon's fourth studio album, Nabuma Rubberband, was released on 12 May 2014 in the United Kingdom via Because Music and on 13 May in the United States via Loma Vista Recordings. The album was inspired by Janet Jackson's slow jams. "Klapp Klapp" was released as the album's lead single. The second single, "Paris", debuted on Zane Lowe's BBC Radio 1 programme on 8 April 2014. Nabuma Rubberband received a nomination for Best Dance/Electronic Album at the 57th Annual Grammy Awards.

The band's fifth studio album, Season High, was released on 14 April 2017 by Loma Vista Recordings. It has spawned the singles "High" and "Sweet"
April + Vista

Their latest EP, Note to Self, debuted to much acclaim in 2016, landing on Pitchfork Radio and NPR’s Capital Soundtrack project. Their music has also garnered nods from a wide range of collectives and publications including Soulection, Saint Heron, Majestic Casual, and AFROPUNK.

The band has taken their dynamic live act to a wide range of venues around the country; they’ve opened for notable acts like Khalid and recently joined fellow DMV artist GoldLink on his North American At What Cost tour, alongside Masego.