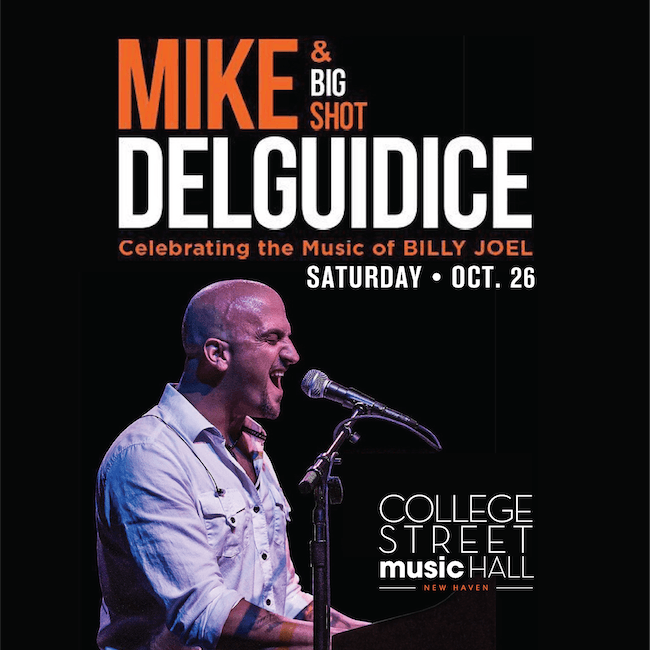 Mike DelGuidice - Front man Mike DelGuidice, living a dream. After 18 years of playing Billy Joel’s music in his band Big Shot, Mike DelGuidice now lives a dream come true. In October of 2013, Billy Joel heard Mike sing, then hired Mike on the spot to join his band full time. And now you can see Mike on tour with Billy Joel all over the US & world in major arenas and stadiums including ever month at the iconic Madison Square Garden.

Mike is the only musician on the planet, and probably the history of music for this type of situation, where the front guy of the band is actually in the band of the artist his band covers. It is the epitome of the Cinderella Story (in his case, Cinderfella).

Mike is also a well-known Long Island Musician/ Singer/Songwriter and has released 2 of his own original CDs.

Mike and his extraordinary band BIG SHOT, which include other current long time legendary members of Billy Joel’s touring band, Tommy Byrnes, guitar and Chuck Burgi, drums are well known and respected for providing a show of Billy Joel's song book packed with hit after chart-topping hit, (and some album cuts for the die hard Billy Joel fan) in a high energy, interactive stage performance. On any given night they will also astonish you with renditions of songs by Elton John, McCartney, Beatles, Journey, and others.

A brilliant vocalist and master of several instruments, including bass guitar, Rhythm guitar, piano and drums, he is also the author of two albums, "My Street" and "Miller Place".

Alex Shillo might have been raised in Manchester, CT, but the young singer-songwriter is as worldly as the most. His Dad's influence, and his hero Bruce Springsteen shows in his eclectic brand of Rock/Country music.

Despite his young age, the multi-instrumentalist has experienced a lot of life. Alex spent a lot of his life on the CT Shorline, cut his teeth as a touring musician with his Dad's band Silverado.

Alex has been enthralled by the music business ever since he was a real young boy and has gotten to enjoy different areas of the industry. His experience started at a very young age in large part (if not entirely!) because his father, Carl Shillo, founder/leader/singer/songwriter of the band SILVERADO. In the late 70's and early 80's Silverado were signed to RCA records, had songs on the Billboard charts, toured the world with Steppenwolf and a bunch others.

When Alex was growing up, there was always a recording studio in their home and it was like a revolving door of different musicians, songwriters and record producers. He was lucky to learn a great deal about the art of recording, performing and songwriting from a young age!

Because of his background, he always felt comfortable in the recording studio and on a stge. So when he began to compose his own songs, it was such a rewarding experience to him.

Playing live came easy as well. He and his brother Andrew formed a few bands at a very young age and regularly played the local scene. Plus, when Silverado (With Alex on Rhythm Guitar and support Vocals) decided to recently tour again up and down the East Coast opening for major acts like Big & Rich, Jerrod Niemann, and many others with Silverado, he rose to that challenge as well.