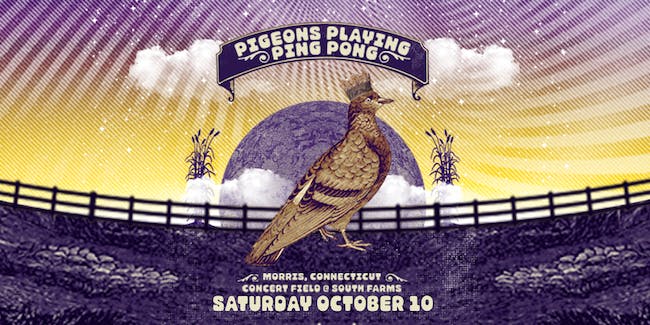 At a time when America seems to grow more divided by the day, Pigeons Playing Ping Pong still believes in the power of music to bring people together.

“We want to offer people an escape, a place where they can leave all their troubles and worries behind and embrace the joy of human connection," says guitarist/vocalist Greg Ormont. "Our mission with our music is to create the most blissful, carefree experience possible.”

Judging by the band’s remarkable growth, it’s a mission well accomplished. In the past two years alone, the psych-funk trailblazers have co-billed at Red Rocks, played halftime at Madison Square Garden, performed on Adult Swim’s FishCenter Live, celebrated the tenth anniversary of their beloved music festival, Domefest, and even earned their first headlining arena show. Now, they’re set to release Presto, their fifth studio album and most sophisticated collection to date. Recorded in the band’s native Baltimore, the record draws on everything from funk to rock to electronic music, building off the group’s unparalleled live energy and stretching their sonic boundaries further than ever before. Ormont breaks fresh ground with his lyrics here, too, reflecting new heights of emotional and technical maturity as he carves out a space for fans to cut loose, forget their struggles, and celebrate the present together.

“Excitement is infectious,” says Ormont. “There’s nothing more rewarding than radiating the kind of positivity you want to see in the world and then watching it ripple beyond you.”

Hailed as “musical explorers” by Rolling Stone, Pigeons Playing Ping Pong—Ormont, fellow guitarist Jeremy Schon, bassist Ben Carrey, and drummer Alex “Gator” Petropulos—first took flight roughly a decade ago at the University of Maryland, and the band has since gone on to play more than a thousand shows across 44 states. Driven by a relentless work ethic and an ecstatic sound, the fun-loving four-piece built their reputation on epic, blissed-out concerts blending addictive funk grooves with psychedelic jams and intoxicating energy. Glide called them “a band that melts faces and pulls no punches,” while Relix praised the group as “joyous” and “dance-worthy,” and Jambase described them simply as a “powerhouse.” Acting as their own independent label, the quartet released four studio albums prior to Presto (including their most recent record, 2017’s widely-acclaimed Pizazz) and racked up more than twenty million streams on Spotify alone. They quickly became festival favorites, too, performing everywhere from Bonnaroo to Electric Forest to Jazz Fest and welcoming top-tier sit-ins along the way from Marcus King and Karl Denson along with members of Vulfpeck, The Revivalists, Umphrey's McGee and The String Cheese Incident among others. Fueled by their rabid fanbase, known colloquially as The Flock, the band closed out 2019 with some of their biggest headline shows yet, topping it all off with a triumphant New Year’s Eve bash at North Carolina’s ExploreAsheville.com Arena.

Pigeons Playing Ping Pong’s annual holiday shows actually played an important role in shaping the sound of Presto. Every Halloween and New Year’s Eve, the band hosts intricately themed blowouts, usually with a clever pun for a title, that find them adopting the styles of various other artists. One year, for example, it was “Red Hot Sergeant Peppers” (combining the music of the Red Hot Chili Peppers and The Beatles); another, it was “New Year’s stEve” (bringing together the music of Stevie Wonder, Steve Miller Band, Stevie Ray Vaughan, etc.).

“Those shows have been crash courses in learning new ways to play and arrange music,” says Ormont. “We picked up different techniques from all these different genres that we were able to draw on when writing Presto.”

Writing is a never-ending process for the band, and their songs are constantly evolving organisms. Often, an extended improvisation in the group’s rehearsal space will lead to an unexpected melody or chord progression, which will go on to form the foundation of a track. Once the foursome fleshes out the song's structure and Ormont adds lyrics, the band will take the song on the road and perform it live for their most trusted confidants: The Flock.

“The crowd is like an equal member of the band at this point,” says Ormont. “We really feed off their response and truly value their input, and we can tell right away what works and what doesn't from their reaction.”

While those live shows are marathon, sprawling affairs, Pigeons Playing Ping Pong takes a more concise approach in the studio, boiling tracks down to their core essence in order to capture the most crisp, clean, and focused iterations possible. The result is a distilled dose of pure energy, the kind of pulse-pounding lightning in a bottle that absolutely explodes out of the speakers.

“We went from a lengthy tour straight into the studio to record Presto,” says Ormont, “and I think that had a big impact on the sound. We had just finished playing a lot of these songs on the road, and that experience made our performances on the album so much more confident, lively and electric.”

That fiery confidence is immediately apparent on album opener “King Kong,” which features lightspeed guitar work and funky horns anchored by a rock-solid rhythm section and wry, playful lyrics. It’s a big, bold sound that sets the stage perfectly for an album all about embracing our power to focus on the good in this world and to share it with the ones we love most. The effervescent “High As Five,” for instance, implores listeners to “lead the life you’ve always hoped for,” while the rousing “Overrun” insists “You gotta give it all, all for one / Let’s appreciate all of the times we’ve made,” and the swaggering “Snake Eyes” reminds us that “this fight is for people who want to stand up.” As carefree as the album can feel (the bilingual “Yo Soy Fiesta,” inspired by one of former NFL star Rob Gronkowski’s more iconic catchphrases, is a lighthearted highlight), it also recognizes that there can be no happiness without heartache, no joy without defeat. The psychedelic instrumental “Skipjack” descends into darkness before emerging into the light, while the jazz-tinged “Havana” wrestles with doubt and despair before a helping hand lifts it back into hope and optimism, and the breezy “Dawn A New Day” explores all the ways we can pick ourselves up when we’re feeling down and out.

"We're fortunate to have met so many people on the road who've said that our songs helped them get through a tough time in their lives,” says Ormont. “Our music has always been about looking on the sunny side of life, and it means a lot to know that we can help others do the same while having a blast and pursuing our dreams."

With an album as uplifting as Presto, the future’s looking very sunny indeed.