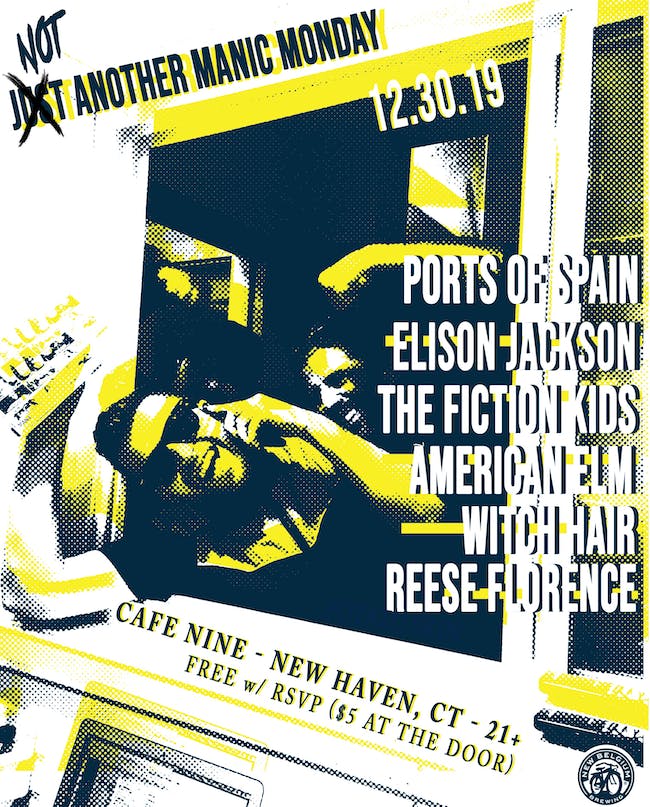 Not Another Manic Monday:

iCal
Google
Free with RSVP ($5 at the door)

From the back of the bar, Ports of Spain instantly scan as a full band, so it's a shock to discover their mathy shoegaze-pop is constructed by just two musicians . Ilya Gitelman uses octave pedals and loops to play lead, bass and rhythm guitar simultaneously, while Sam Carlson contributes vocals, keyboards and drums. Don't be fooled -- Ports of Spain are not another band that trades directionless loopy jazz odysseys for pure songcraft. Their equipment never gets in the way of their complex melodies. They write actual songs, consistently avoiding complication for the sake of complication. They juggle tons of ideas in every song, creating a noise that's consistently about to fall apart. That it doesn't is incredible by itself. Their brilliant songs may seem like a bonus under these circumstances, but don't underrate Ports of Spain. Even as these two guys spew chaos into crowded clubs, their songwriting is always there to remind you why a grounding in planned songcraft keeps so many of the best bands tethered to excellence. Ports of Spain belong in their company. Ports of Spain have played with bands like The Dodos, Tera Melos, Hospitality, Beach Fossils, Fang Island, Pissed Jeans, Pile, ONWE, Speedy Ortiz, Morning Teleportation, Kal Marks, The Paper Kites, and Solids.

Elison Jackson is a garage-folk band based out of New Haven, CT that started in 2010.

The Fiction Kids is a post-punk band from New Haven CT. It consists of Kuki Kooks and Alexa Ambrose. They used to play together as the backbone of Laundry Day, bassist Kooks digging Alexa’s drumming from day one. They always complimented each other about how they'd love to get together in a different format in the future. Fast forward a couple years, Alexa ended up not playing with anybody anymore, and Kooks has a dozen songs that need playing for a show. With the help of Sam Carlson (Ports Of Spain, Laundry Day, S.G Carlson) on bass, The Fiction Kids began playing around town.

They’re in the process of recording their debut LP Souvenir this year at Sans Serif Recording Studio with Sam at the helm.

American Elm is the nome de guerre of Chris Bousquet, a singer-songwriter from Connecticut. He is the former leader of the internationally acclaimed High Lonesome Plains. He has performed with such luminaries as Roger McGuinn (The Byrds), Mercury Rev, Howe Gelb, Miracle Legion, John Sebastian, Asleep at the Wheel, Rhett Miller, Mark Mulcahy, The Turtles, Nathaniel Rateliff and the Night Sweats, J. Geils, and Susan Cowsill.

The High Lonesome Plains rose to critical acclaim between 1999 and 2006, receiving airplay and garnering critical acclaim on four continents, Americana-UK called their 2002 EP Songs For Young Lovers, “one of the year’s best.” Rolling Stone writer and Australian DJ Stuart Coupe called it "the best thang to arrive in the mail for ages." The lead track on the EP, "Brass Ring" was featured in the independent film The Box, the television show Witchblade and was included on 36,000 copies of a Magnet Magazine New Music Sampler.

In 2006 The High Lonesome Plains released a full length album entitled The River and the Sea which received glowing praise both domestically and abroad (including Belgium, The Netherlands, UK, Australia and Spain). Independisc.com selected “The River and the Sea” as their record of the year.

From 2004 to 2007 Chris toured the Northeast as part of the “Times Three Tour” with songwriters Frank Critelli and Mr. Ray Neal (Miracle Legion, Vic Chesnutt).

2018 was a productive year in which Bousquet released a live E.P. "The Ivory Sessions," and the "A Long Road To Be Free" single, a collaboration with musician and producer Eric Lichter (Kerri Powers, Mercury Rev), recorded at Dirt Floor Studios in Connecticut. 2018 also marked the public debut of "The Year of the Horse: A Folk-Rock Song Cycle" written by Bousquet, and performed live in New Haven by some of the regions most talented, and beloved musicians.

"First there’s just a chiming guitar, picking out plaintive, atmospheric chords. A second guitar unleashes a denser set of notes on a splash from the drums. Then the rhythm falls in as both guitars and bass take off into a hazy splendor. Even when the drums double-time it for the chorus, and the vocals bounce on the lyrical hook — the “high” in “somewhere high” stretched out to hah-ee-yah-ee-yah-ee — the song’s sunny fog doesn’t disperse.

Clocking in at only 3:02, Witch Hair’s “Somewhere High” is a song that feels over too soon, which in this case is a good thing. When it’s done, you can just hit play again.

“Somewhere High” is the third song from Out on Love, Witch Hair’s second release since 2017’s You Are Not a Surface. In that time, Witch Hair has become a steady presence in New Haven’s music scene, and Out on Love makes it easy to understand why. Joe Russo (vocals and guitar), Ashley Kenney (vocals and bass) and Tom Connolly (drums) are a fully developed power trio, able to fill a club with a roar and also drop down to a whisper.

Their songwriting, meanwhile, balances tunefulness and dissonance, sweetness and murk. Alongside “Somewhere High” summery shimmer is the sharp squall of “Halo,” the album’s raucous opener. Where “Cracked Pavement” finds the band’s drone at its richest, “Say Anything” boasts an arrangement that has the band almost genre-hopping into straight-up dance music. And parts of “Motorcycle I” and “Motorcycle II” have the sneaky, tense feel of a spy movie.

Then the album’s closer, “You Are Not a Surface,” feels like a summation of the seven songs that preceded it. It takes the most chances with an expansive arrangement that pays off as the trio fills their biggest sonic space yet. “Welcome to my house, take a look around,” Kenney and Russo sing together. On Out on Love, you can feel right at home."

Reese Florence is a singer-songwriter from NYC. Their unique sound combines de-tuned baritone ukulele with a powerful voice, which can fluctuate from delicate to soaring in the span of a verse. Newly transplanted to Philly, they have been ingrained in the Philly songwriter and jam scene since arriving to town earlier this year